These are questions that are most commonly asked among music lovers. Less often will the questions be reversed. Why? Jazz is a performer-focused genre, whereas classical emphasizes the composer.

For a jazz pianist, composing and performing are one in the same. The composer/musician Gunther Schuller once wrote that “improvisation is the heart and soul of jazz,” and David Baker would argue that improvisation should be the cornerstone of jazz education. The improvisational roots of jazz can be found in how many pieces are notated: rather than have every note written down, jazz performers often use lead sheets, which offer the melody and a broad outline of the harmony. It is up to the performer to fill in the gaps. A familiar standard might look something like this on the page: 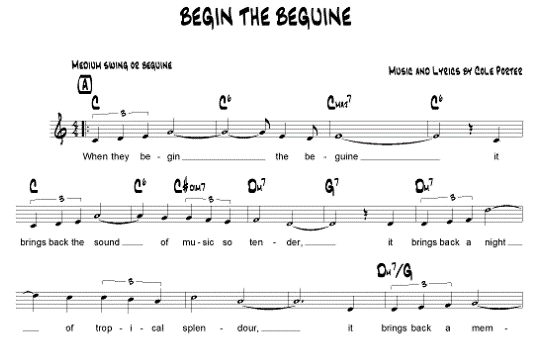 Lead sheets give jazz musicians a great deal of freedom. You get a melody and some chords, and the rest is up to the musician. Following are two interpretations of this Cole Porter classic:

Contrast this to the highly detailed writing, of say, a song by Anton Webern from his Op. 12, (“Schien mir’s, als ich sah die Sonne”).

Notice in Webern’s song, every single note has some kind of additional marking. The composer has taken control of every pitch, rhythm, dynamic, tempo, articulation, and phrasing. He leaves almost nothing to chance (except perhaps a musician’s ability to realize every detail at one time). The Webern example is extreme, but generally speaking, classical notation is far more detailed than jazz.

The role of the jazz performer has always been to realize a piece of music as creatively and individually as possible. While performers draw on traditions that have been handed down through generations of jazz musicians, no two jazz performers (if they are any good) will perform a piece the same way. In fact, given the improvisational aspect to jazz performance, rarely will two performances of the same piece by the same artist sound exactly the same.

American Pianists Association friend and frequent jury member (both jazz and classical) John Salmon writes, “The tradition of focusing on the jazz performer rather than the work being performed is at the core and beginning of the whole jazz tradition. Jazz pianists were always trying to outdo each other, as in the famous Harlem rent parties when pianists would basically compete against each other and the most extravagant and virtuosic pianist would win the night's honor. Virtuosity has always been at the core of jazz performers. James P. Johnson, Fats Waller, Art Tatum, Charlie Parker and John Coltrane had mighty chops. True, there were outlier exceptions, including the wistful and decidedly non-virtuosic saxophonist Paul Desmond and the subdued, lyrical Billie Holiday. But, even in these cases, the focus was inevitably on how they interpreted jazz standards almost more than the jazz standard itself.”

There are many schools of thought in classical performance, and aesthetics change considerably over time. Music of previous eras became more popular in the 19th century when a canon of literature was established, and performers at the time had no problem putting their own spin on the classics, often ignoring markings and even changing notes. Gustav Mahler even rearranged works, including symphonies by Beethoven, “correcting” areas that suffered from the limitations of the early 19th-century orchestra. Mahler would argue that these “corrections” were in keeping with the spirit of the composer—he simply wanted to bring out layers in the score.

In the early 20th century, the come scritto (as written) movement popularized by the conductor Arturo Toscanini became a popular aesthetic. Sviatoslav Richter would apply this technique to the piano. On his approach to performing, he wrote, “The interpreter is really an executant, carrying out the composer's intentions to the letter. He doesn't add anything that isn't already in the work. If he is talented, he allows us to glimpse the truth of the work that is in itself a thing of genius and that is reflected in him. He shouldn't dominate the music, but should dissolve into it.”

Here is an example of Richter playing Bach:

While Toscanini and Richter would embody a textual interpretation (we might call them the Scalias of music), other 20th-century musicians were inclined toward a more individual way of playing, not unlike the musicians of the 19th century. The conductor Wilhelm Furtwängler epitomized this style as a conductor, and you can hear his influence on pianist/conductor Daniel Barenboim, who believes that tempo, far from being prescribed by a metronome marking, should be influenced above all by harmony. This tradition can find roots in Beethoven, who said about his own metronome markings that they only applied “to the first measures, as feeling has its own tempo.”

Later in the 20th century, the historically informed performance movement would rely on research of period texts and treatises to attempt to recreate musical works as they sounded at the time of composition. Some performers specialize in performing music of specific eras by applying our knowledge of how things were performed over 200 years ago. Since most instruments evolved significantly throughout the 19th century, some instrument makers began building instruments in the style of previous eras to perform music from that era.

Regardless of style, most classical musicians would agree that they are only trying to express the composer’s intentions, not their own. Classical pianists view themselves more as curators rather than co-creators. The musician becomes the vessel through which the composer speaks.

As one may imagine, the task of evaluating jazz pianists is quite different from that of a classical pianist. Judges will tell you what they have in common, though, is that they must have exceptional technique, and they must be able to connect to the audience. American Pianists Awards finalists and winners consistently demonstrate these qualities, and there are many performances to witness on our YouTube channel. Take a look and subscribe today!

Article by APA Artistic Administrator Milner Fuller with special thanks to John Salmon.