Six Degrees of Kevin Bacon is a parlor game based on the concept of "six degrees of separation” that posits any two people on Earth can be linked via six or fewer acquaintances. Linking anyone involved in the Hollywood film industry to the actor Kevin Bacon in the shortest number of steps results in an actor’s Bacon Number. For example, Academy Award winner Natalie Portman’s Bacon Number is two: she was in “Zoolander” with Cuba Gooding Jr. who was in “A Few Good Men” with Kevin Bacon. Silent film actress Clara Bow? Three.

Fun, right? For the 2019 American Pianists Awards, it turns out we can play a similar game with finalist Emmet Cohen. While he may be young in age, his playing experience runs deep. Conversations with Emmet can quickly turn to discussions of the styles and influences of other musicians. Here he explains why he strives to play with as many musicians as possible.

Emmet has been spending a lot of time with jazz masters over the last couple of years. His signature project is the "Masters Legacy Series," a celebratory set of recordings and interviews honoring legendary jazz musicians. He serves as both producer and pianist for each album in the series, which thus far has featured drummer Jimmy Cobb (Vol.1 album review) and bassist Ron Carter (Vol.2 album review). Future releases bring Benny Golson, Tootie Heath and George Coleman into the mix.

Emmet does not confine his collaborations to the senior jazz masters; he also has wide relationships with his contemporaries. One of the preliminary jury’s favorite tracks was of Emmet and drummer Joe Saylor playing “Joshua,” originally composed by Victor Feldman and Miles Davis. Joe plays on The Late Show with Stephen Colbert with pianist Jonathan Batiste and has forged a deep musical relationship with Emmet:

Given his penchant for playing music with other people, Emmet already knew three of the other 2019 Awards finalists—Keelan Dimick, Dave Meder and Billy Test:

Emmet met the one finalist he did not know at the 2019 Awards Sneak Preview at Dizzy’s Club Coca-Cola. He and Kenny Banks Jr. immediately started making music together: 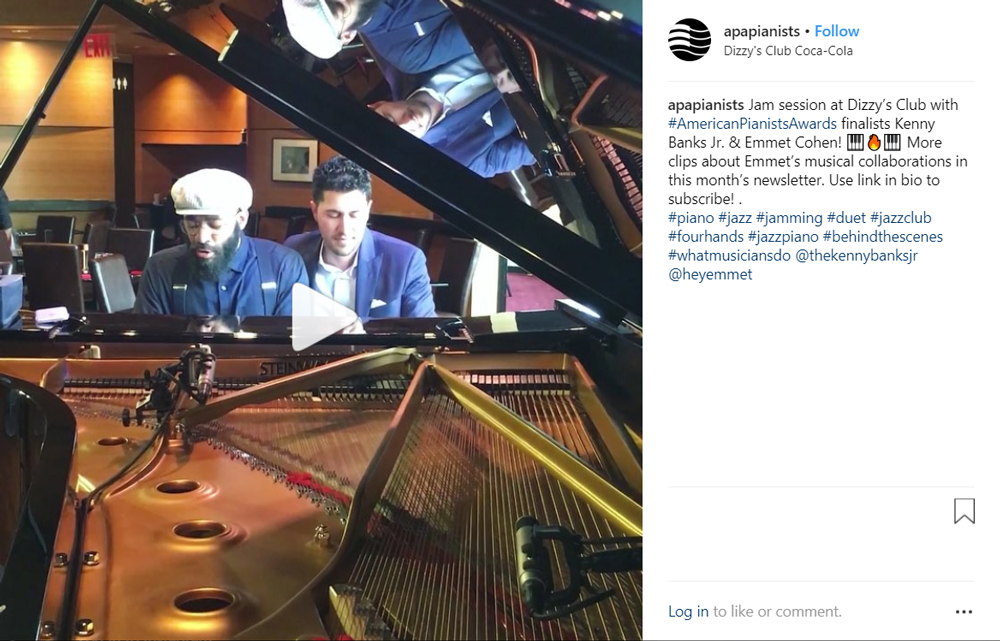 This camaraderie among the finalists is what excites Emmet most about participating in the American Pianists Awards. Given that this is Emmet’s third time as a finalist, he has a great feel for what lies ahead and is also looking forward to reengaging with the Indianapolis community this season.

With all of these connections, we might be able to talk about a jazz musician’s Cohen Number in the near future. In the interim, we are thrilled to have you back, Emmet!