As a pianist, one must be very creative when thinking of an Italian program. There is almost a total dearth of Romantic piano music, most likely because of the prominence of opera during that period.

However, Italy has always had great music and has always inspired people.

Combining exceptional lyricism and insight with consummate technique, Alessio Bax is without a doubt "among the most remarkable young pianists now before the public" (Gramophone). A Steinway artist, he lives in New York City with Lucille Chung and their young daughter, Mila. Beyond the concert hall he is known for his longtime obsession with fine food; as a 2013 New York Times profile noted, he is not only notorious for hosting "epic" multi-course dinner parties, but often spends his intermissions dreaming of meals to come.

American Pianists Association director of marketing Lee Clifford spoke with Alessio in advance of the pianist’s concert in Indianapolis on March 8.

I'm curious…how did you originally get into music?

Well, my parents are not musicians, but they loved music. As you know, I was born in Italy, and of course like all the other children, I wanted to be a soccer star. Very early on I realized that I wasn't as talented as the other kids—probably by the time I was six. So, the next thing was music. I had heard a lot of organ music in church and loved the music of Bach—it really moved me! I decided that I wanted to play the organ, so my parents started getting teachers for me: first solfège, then organ. When I was nine, it came time to enter the music conservatory. At that time, organ majors were required to take five years of piano before they would let you switch to the organ. I really didn't want to do this, but of course as I started it, I very quickly fell in love with the instrument, repertoire and all the great pianists’ recordings. I was really hooked, let’s say.

It is amazing to me you had intended to be an organist!

Yeah, I was completely obsessed with Bach! I studied a children's book about his life and analyzed little fugues—I mean I loved everything about his music and his persona.

However, I never really got to play much organ! My first teachers were organ teachers, but they would mostly teach me on the piano. Every once in a while, they would let me play the organ.

The funny thing is fast forward many years to 1996: I think I was still a student and had just come to the States. I made my very first professional recording for Naxos, the complete works of Marcel Dupré for piano and organ. The pieces were very strange and very interesting, beautiful but unusual pieces that he wrote for himself and his daughter who was a pianist to play—so duet for piano and organ. Quite massive works. So, my very first recording was with the organ, and I somehow feel satisfied now; I don't have the need to switch to the organ anymore!

I'm still fascinated, especially so with modern organ playing and the whole French improvisation tradition, these kinds of things that I didn't know back then but are still so fascinating to me.

You are in New York City, right? I know there are many great organs in in the city, including one at St. Ignatius Loyola on the Upper East Side. They have a beautiful concert series there.

I should do that--that's a good idea!

You lived in Bari until you were 14, is that right?

Sixteen. I graduated at 14 from the conservatory, but I stayed a couple more years as I was still in high school. Then I moved to the States to study in Dallas with Joaquín Achúcarro.

What your strongest memories of Bari, of home?

Well my family, friends and food. And the sea is something that you especially feel if you are born near water—you can never take that away. There is something very emotional; I could see the Mediterranean from my window, so it's something very, very special every time I go back.

Then of course growing up with my brother. We mostly attended the same schools and then also the conservator. He studied violin, but he was in love with the organ as well. We used to read Bach fugues and split the parts; he would always play bass in the pedals. So many wonderful memories.

Also, the junior high school was attached to the music conservatory. That was very special feeling where all your classmates play music, but it's also a regular school so everyone this is somewhat gifted and special in that sense. There was that common love that we all shared.

Speaking of shared love, I know that your wife, Lucille Chung, is an accomplished pianist on her own, and you recorded an album together. Do you collaborate on programs?

Yes, of course! I mean to have a great pianist in the house is such a gift for many reasons. She is really my most detailed critic. I always run pieces for her and programs through her somehow.

I love to make programs; it is something that I really adore.

It's very much similar to my love for food, in a sense, when you design the menu you know you want something that makes sense but is balanced and satisfying and not too much.

So, let's say maybe I'm the program maker in the house, but I always want to hear what she has to say. As musicians we know what we want, but our impressions are kind of distorted by the fact that we are creating music in the moment. We always need to have an objective opinion that we can really trust. I can't imagine anybody else that I would trust.

Alessio Bax on NPR Tiny Desk. His wife Lucille and their daughter also appear on the episode.

I love the connection you made between designing a meal and designing a program. Could you design a meal to go with this album, Italian Inspirations?

I don't know…that's a hard connection to make. You know I have been tempted so many times! Especially now as I'm running a wonderful music festival in Tuscany and there is a culinary aspect to it which I like to curate. I was so tempted to make parallels, but every time I think of something it just feels a little bit forced.

So, either you do it the very superficial level or such deep esoteric level that no one will really get. I mean the easy thing here is Italian. But then you know maybe seen through different eyes. I recently had a wonderful meal in Copenhagen. You know Scandinavian cuisine is very cerebral, and it's a world of its own. The chef there had southern Italian roots, and somehow—even though the sensibility of the food was definitely Scandinavian—there was something that really attracted me to it. As the meal went on, I learned to appreciate that actually there were Italian components in it. Not forced, but rather in very subtle ways, so I guess this would be the closest I can think of.

Maybe just a glass of Italian red, then? A Barolo?

Let’s end with your hopes for the audience of your March 8 performance. What do you wish they take from the experience?

Well I have toured this program quite a bit. The way it was created was starting from the Rachmaninoff Variations on a Theme of Corelli, which is a piece that has lived with me for many years. Then I tried to find the way to show how Italy influenced different composers on different levels.

But then the program, I find, takes a life of its own and kind of makes its own connections. The more I play, the more people find different types of connections and that's very exciting!

Even beyond what was originally my scope, so there are obvious connections between the Bach/Marcello and Rachmaninoff/Corelli because they share the same key and they start pretty much in the same style being Baroque. Then they go very differently. 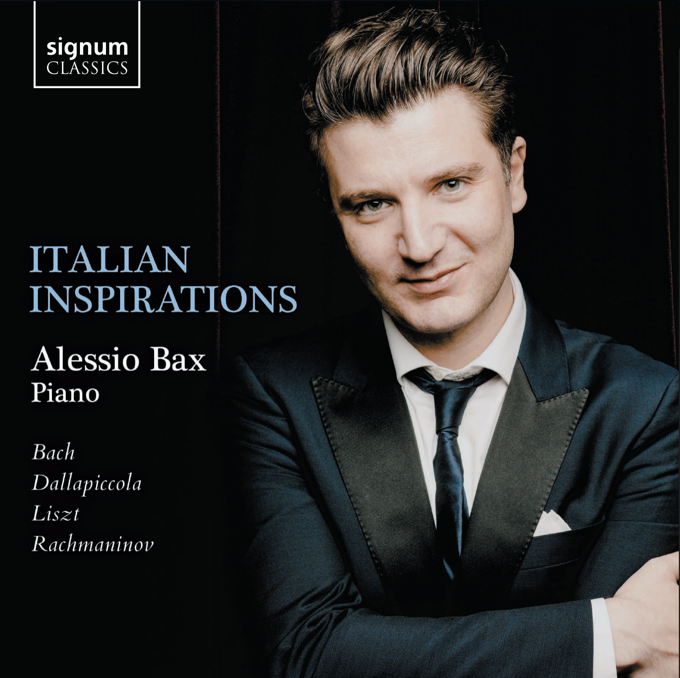 But then there are less obvious connections like “St. Francis of Assisi” by Liszt and the way it's really visionary: now we've heard it so many times, we take it for granted. It happens mostly in the upper register—there is no bass for a long time—and it's made of very subtle, small gestures. Silences are incredibly important.

When I played it in Buenos Aires a journalist called it “Italian style dodecaphonism,” which is very interesting because everything is really beautiful and every indication in the score is to accentuate expressivity.

The last piece of the Dallapiccola is the most technical one. It’s called Quartina, and it's the four different ways that you can organize the tone row. It should the driest of them all, but it sounds like a mid-period Scraibin piece, with the harmonies in the way he arranged the tone rows. It's quite incredibly powerful!

So, to answer your question, my hope for the audience is to follow my journey—it really feels like a journey from the Marcello through the Liszt. And the “Dante” sonata kind of sums up everything that's human—all in 15 minutes!

I would also love for the audience to think on their own about similarities and differences between the pieces. It is a fascinating program.

That is very exciting! When does the album come out?

Wonderful! Thank you for the discussion today.

Thank you, Lee. See you in March!