Robert Schumann and the Piano Miniature

While Beethoven and Schubert are considered transitional composers between the Classical and Romantic Eras, Robert Schumann emerged in the first generation of quintessentially Romantic composers. Born in 1810, Schumann is in the middle of a group of composers who were born between 1809 and 1813 that includes Mendelssohn, Chopin, Liszt, Wagner, and Verdi. This post will explore some of the piano music of Schumann’s earlier years, particularly the works performed for the 2013 and 2017 American Pianists Awards. 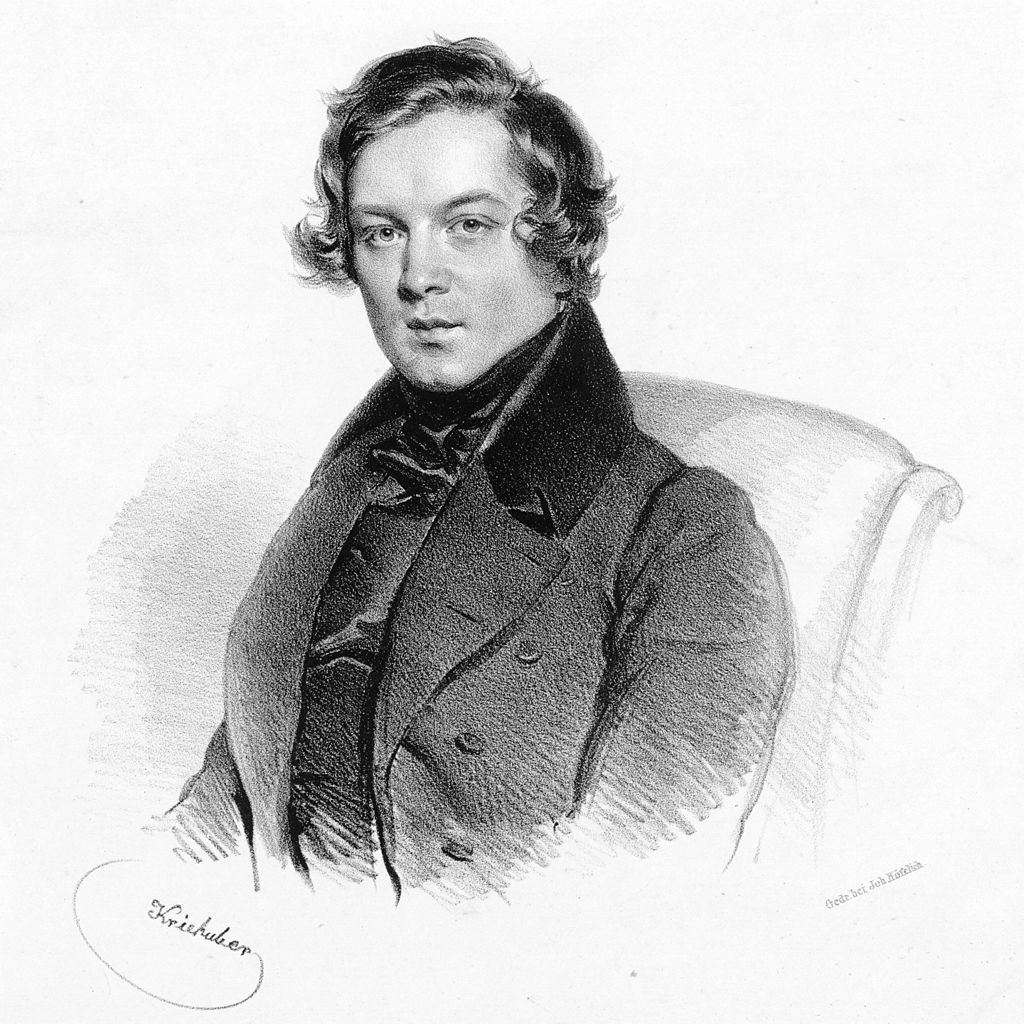 With the emergence of the Romantic Era came a new way of writing for piano. Some composers were wary of engaging with the past forms after Beethoven, in particular Sonata Form (which classical-era composers used for most large-scale instrumental compositions). Instead of three- or four-movement piano sonatas, they began writing suites of shorter works. Broadly, these small works can be called “piano miniatures,” and they are often grouped into collections or suites. These miniatures are known by many names. Chopin wrote etudes, preludes, nocturnes, impromptus, and dances that include polonaises, mazurkas, and waltzes. Mendelssohn wrote forty-eight Lieder ohne Worte, or Songs without Words. Schumann’s piano works often carry literary titles.

Complementing his musical aptitude, Schumann buried himself in literature. His father owned a bookshop and was a writer and translator, and Schumann was exceptionally well read. It’s no surprise that Schumann sought literary, extramusical inspiration for his compositions. Some of his works contain recurring characters, most notably Florestan, Eusebius, and the other Davidsbündler. Florestan and Eusebius represent two different sides of Schumann: Florestan is brash, manic, and heroic; Eusebius is melancholy, contemplative, and poetic. The Davidsbündler are a musical society who fought for truth and beauty in art against the shallower, more overtly virtuosic music of the day--just as King David and his followers had fought the Philistines. The Davidsbündler are both real people (Schumann’s friends) and imaginary characters in his works.

Before we go on, it may be necessary to define what I mean by “extramusical meaning.” In the 19th century, there was a divide on the question of what instrumental music should express. On one hand were those who thought that instrumental music should speak only for itself and, while it may be emotional, does not refer to anything outside of the music itself. This style would become known as Absolute Music and would later become associated with Johannes Brahms. On the other side were composers who actually sought to use instrumental music to tell a narrative. Berlioz was an early pioneer in this method, and Franz Liszt would invent new forms based as much in traditional narrative structure as they were musical forms. This music is known as Program Music, and often the audience is given the text to follow along.

Much of Schumann’s music stands somewhere between Absolute Music and Program Music. Schumann believed that all instrumental music should stand on its own without any kind of program, however, many of his musical ideas and inspirations come from outside the music itself, and knowing the outside references can add a rich layer of subtext to the music.

For his Opus 1, Schumann chose a classic, abstract, purely musical form: variations on an original theme. Schumann, though, cannot help but to give the theme extramusical meaning: he invents a fictional countess named “Abegg,” and the main theme is based on those notes: AB(♭)EGG. The countess becomes a kind of character in his work. Here is Sara Daneshpour's performance of Variations on the Name “ABEGG,” Op. 1:

Schumann’s first attempt at Sonata Form, that towering shadow from the classical era that was popularized by Haydn and Mozart and stretched to the breaking point by Beethoven, comes in the form of his Piano Sonata No. 1. (For a brilliant description of Sonata Form that anyone can understand, see Leonard Bernstein’s Young People’s Concert on Sonata Form). While Schumann’s First Sonata has all of the trappings of a classical sonata–four movements with their traditional forms–again, Schumann seeks extramusical inspiration for the themes, namely his alter egos, Floristan and Eusebius, and the love of his life and future wife, Clara Wiek. The dedication on the first edition published in 1836 read, “To Clara from Florestan and Eusebius,” and Schumann’s name did not even appear on the title page. Here is Alex Beyer's performance of Piano Sonata No. 1 in F-sharp Minor:

After his first attempt in the sonata genre, Schumann would turn back to his miniature forms. His Fantasiestucke, Op. 12, is a set of eight character pieces, and his Symphonic Etudes, Op 13, is another set of variations, though here, Schumann experiments with a less rigid variations form. Rather than present discrete variations on one theme, the theme itself seems to develop as the piece goes on. Individual motives are explored in a developmental manner, and two of the etudes are not even variations on the theme at all (nos. 3 and 9), but rather lighter, contrasting material. Both Opp. 12 and 13 contain allusions to Florestan and Eusebius, and individual sections are identified with the contrasting characters. Listen! Sam Hong performs excerpts from Fantasiestucke and Steven Lin Performs Symphonic Etudes.

For his Kinderszenen, Op. 16, Schumann depicts scenes from childhood in twelve delicate pieces. Schumann added a thirteenth piece before publication, “The Poet Speaks,” where the composer drops the childlike facade. In his Humoresque, Op. 20, Schumann takes his inspiration from the novelist Jean Paul, whose humor has been described as playful, intellectual, and even melancholy. Schumann did not divide his Op. 20 into individual movements, but rather, it is one continuous piece made up of contrasting sections that are woven together. Listen! Eric Zuber performs Kinderszenen and Drew Petersen performs Humoreske.

Pianist Charles Rosen called Schumann’s early piano works “song cycles without words.” Schumann would turn his compositional efforts to actual song cycles soon after Humoresque when he wrote some of the great Lieder repertoire. Poetry was never far from Schumann’s mind, so it seemed inevitable that he would compose for voice and piano. It was around this time that Schumann does seem to drop many of the literary allusions in his instrumental works. His literary inclinations, then, were expressed through his songs, and he increasingly wrote instrumental music for ensembles rather than solo piano, such as his brilliant Piano Quintet, Op. 44. Here is Henry Kramer's performance of Piano Quintet:

Today, many contemporary instrumental works have extramusical inspiration. After the highly abstract modernism we associate with the mid-20th century (in works like Aaron Copland’s Piano Variations, here performed by Sam Hong), we now see far more outside references in contemporary classical music, such as Judith Lang Zaimont’s Attars, which is inspired by fragrant essential oils. (Drew Petersen performs Judith Lang Zaimont’s Attars on Idagio, a piece commissioned for the 2017 American Pianists Awards). Schumann’s legacy continues through such works today.