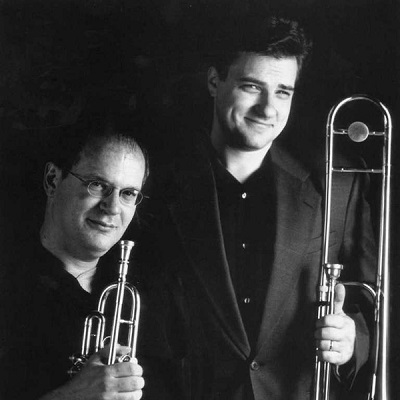 Consisting of 17 pieces, the Buselli Wallarab Jazz Orchestra includes many of the top freelance jazz artists in the Midwest. These artists have decades of performance experience between them, such as appearances with the Smithsonian Jazz Masterworks Orchestra, the Artie Shaw Orchestra, the Benny Goodman Tribute Band, Natalie Cole, Stan Kenton, Maynard Ferguson and Woody Herman, as well as the Indianapolis Symphony Orchestra. The late jazz icon J.J. Johnson called the BWJO, “A marvelous new band with exceptional soloists and some of the most creative and satisfying writing I’ve heard in a long time.”

BWJO co-founders Mark Buselli and Brent Wallarab are respected educators, as well as accomplished musicians and composers. Their common commitment to America’s jazz heritage brought the BWJO to life and helped define the mission of the organization.

BRENT WALLARAB
Since 1991, Brent Wallarab has been lead trombonist with the Smithsonian Jazz Masterworks Orchestra, the jazz orchestra in residence at the Smithsonian Institution’s Museum of American History in Washington, DC. As lead trombonist, he specializes in recreating the entire spectrum of jazz brass styles. In 1992, Wallarab was appointed Specialist in Jazz for the Smithsonian Institution and serves as transcriber, researcher, editor, and advisor for the Smithsonian’s extensive jazz program. He has transcribed and edited over 300 masterworks for jazz orchestra and is considered one of the leading authorities on historical composition for jazz orchestras such as Duke Ellington, Sy Oliver, Fletcher Henderson, and Gil Evans. He has been instrumental is cataloguing and identifying many pieces from the Ellington archives housed at the Smithsonian Institution.
Former Kenton composer Bill Russo has called upon Wallarab to rehearse, guest conduct and solo with the Chicago Jazz Ensemble. Wynton Marsalis has called upon Wallarab to transcribe and arrange for The Lincoln Center Jazz Orchestra and for the “Essentially Ellington” educational program.

Brent Wallarab is currently an assistant professor of jazz studies at the Indiana University Jacobs School of Music.

MARK BUSELLI
Mark is head of Jazz Studies at Ball State University in Muncie, Indiana. Voted teacher of the year in the music school at Butler University for 2004-2005 season Mark was also the 2001 director of the Indiana All State Jazz ensemble. He also received a Creative Renewal grant from the Indianapolis Arts Council for 2005 to go to NYC and study arranging and composition with well-known artists. He is a clinician for the Indianapolis Jazz Foundation, Conn/Selmer, and a member of BMI, and IAJE.