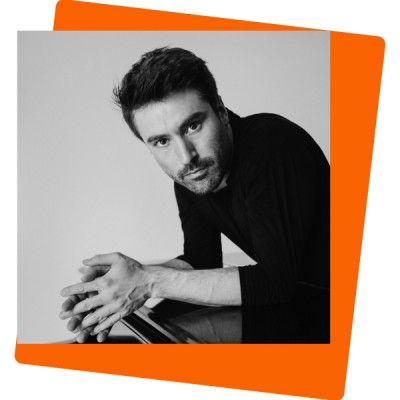 The Grand Encounters concert with pianist Dan Tepfer, scheduled for Sunday, May 3 at 3:30 PM at Trinity Episcopal Church, Indianapolis, has been cancelled as an “in person” concert. BUT it will take place at the same time from a private, non-public location via livestream from the American Pianists Association. Please follow us on Facebook and check in at americanpianists.org in the coming weeks for further details.

Thank you for the continued support of the American Pianists Association and our artists. We are grateful to CHDouglas and Gray Wealth Management for its continued sponsorship of this concert in a new format.

Dan Tepfer, as the 2007 American Pianists Awards winner for jazz, is no stranger to Indianapolis. The pianist-composer is known for his wide-ranging ambition, individuality and drive—“a remarkable musician” in the words of The Washington Post—and one “who refuses to set himself limits” in those of France’s Télérama.

Tepfer will play Bach’s complete Goldberg Variations, interspersing his own improvisations on Bach’s original variations. The jazz pianist recognizes Bach as a fellow improviser, and considers the Goldbergs to be an inspiring font for creativity. When he first performed the work to New York audiences in 2013, The New York Times called it a “riveting and inspired version.”

The New York City-based Tepfer, born in 1982 in Paris to American parents, has performed with some of the leading figures in jazz, including extensively with veteran saxophone luminary Lee Konitz. Tepfer has crafted a discography already striking for its breadth and depth, ranging from probing solo improvisation and intimate duets to richly layered trio albums of original compositions.