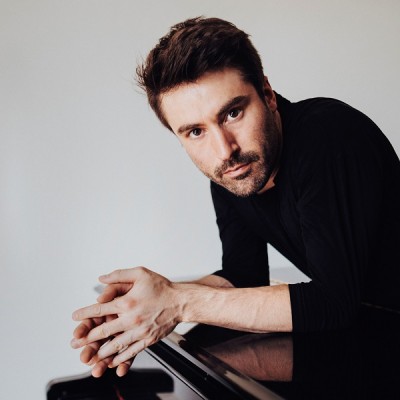 One of his generation’s extraordinary talents, Dan Tepfer has earned an international reputation as a pianist-composer of wide-ranging ambition, individuality and drive — one “who refuses to set himself limits” (France’s Télérama).

The New York City-based Tepfer, born in 1982 in Paris to American parents, has performed around the world with some of the leading lights in jazz and classical music; he has also crafted a discography striking for its breadth and depth, encompassing probing solo improvisation and intimate duets, as well as trio albums rich in their rhythmic verve, melodic allure and the leader’s keen-eared taste in songs no matter the genre.

Tepfer earned global acclaim for his 2011 Sunnyside album Goldberg Variations / Variations, a disc that sees him performing J.S. Bach’s masterpiece as well as improvising upon it — to “elegant, thoughtful and thrilling” effect (New York magazine). Tepfer’s newest album, Natural Machines, stands as one of his most ingeniously forward-minded yet; available now as a video album on YouTube and as an audio-only CD/download/stream via Sunnyside, this solo project five years in the making finds him exploring in real-time the intersection between science and art, between coding and improvisation, between digital algorithms and the rhythms of the heart.

Tepfer has also composed for various ensembles beyond jazz. His piano quintet Solar Spiral was premiered in 2016 at Chicago’s Ravinia Festival, with Tepfer performing alongside the Avalon String Quartet. Tepfer has received commissions from the Prague Castle Guard Orchestra for two works: the suite Algorithmic Transform (2015) and a concerto for symphonic wind band and improvising piano, The View from Orohena (2010). In summer 2019, Tepfer unveiled his jazz-trio arrangement of Stravinsky’s Baroque-channeling Pulcinella

His free performance begins at 2 p.m. Sunday, April 18, and can be viewed on the Tri-C website on the day of the recital.

Tri-C Performing Arts is a series of concerts, theater performances and art shows designed to bring a world-class artistic experience to the Greater Cleveland community. All 2020-2021 offerings are virtual due to the COVID-19 pandemic. To learn more, visit www.tri-c.edu/performingarts.

The 2020-2021 Tri-C Classical Piano Series is presented by the William O. and Gertrude Lewis Frohring Foundation and made possible by Cuyahoga Community College, the National Endowment for the Arts, the Ohio Arts Council and Arts Midwest.