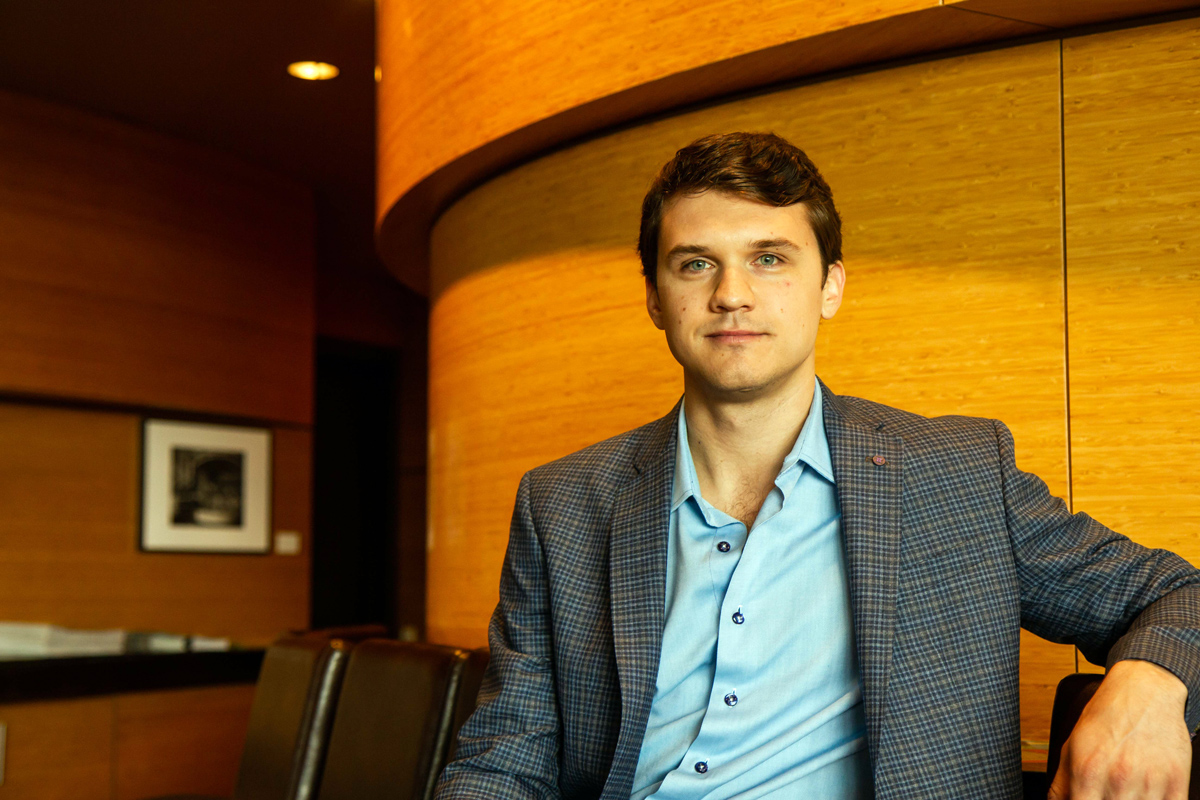 Fairfield is a town of under 10,000 people in the southeast corner of Iowa. A Midwestern city surrounded by rolling farmlands, it is home to the world’s largest training center for Transcendental Meditation, a form of silent mantra meditation, developed by Maharishi Mahesh Yogi.

Listen to Keelan discuss his youth in Iowa and his ongoing practice of Transcendental Meditation.

At age 13, Keelan and family moved to Boise, Idaho. After taking first place at the Lionel Hampton International Jazz Festival in 2007, fifteen-year-old Keelan Dimick committed himself to a lifelong pursuit of jazz piano. He studied at Manhattan School of Music and the University of Miami’s Frost School of Music.

Here Keelan discusses the music he submitted to the preliminary jury.

One piece Keelan submitted that had particular appeal among the preliminary round jurors was "Nobody Else But Me" by Jerome Kern. "Peter Bernstein’s version of it really stuck with me," says Keelan. "He recorded with Brad Mehldau, Larry Grenadier and Jeff Ballard. They played it in this medium simple swing but took ridiculous solos on it. I love the melody, I love where it goes harmonically. It distinguishes itself from other standards in that its harmonic progression is a little different; it has some unusual turns which I love about it."

After receiving his master's degree from the Frost School, Keelan decided to stay in Miami to perform and teach. A short talk with his teacher Martin Bejerano provided another piece to his application packet.

Keelan will have abundant freedom to explore material for solo, trio, big band and more as part of the competition. Asked what other aspects of the Awards excite him, his residency at Lawrence Central High School in Indianapolis (“I love teaching!) stands out, along with the opportunity to make new friends in the other finalists:

Emmet Cohen is a good friend of mine. I can't say I know any of the others. I feel like I’ve heard of Billy. I checked out some of his videos, and man he is amazing! That’s the cool thing—researching these guys makes me want to talk to them and say, ‘man you sound great!’ It is so cool to get connected.

We look forward to connecting more with Keelan this fall!

2019 American Pianists Awards finalist Keelan Dimick performs Saturday December 1, 2018 at the Jazz Kitchen in Indianapolis in his first live-adjudicated performance of the competition.