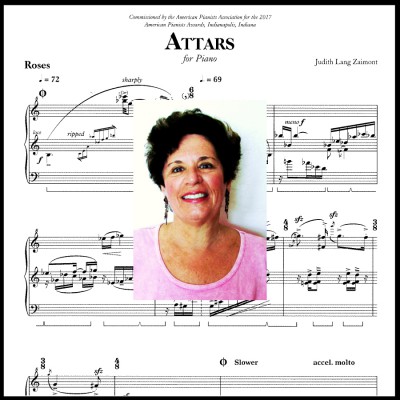 The five finalists of the 2017 American Pianists Awards begin the final week of their 13-month-long competition with a new music recital. Each pianist will play a short piece by composer Judith Lang Zaimont commissioned specifically for the Awards.

The new work, "Attars," is named for fragrant essential oils used for perfumes as well as medicinal, therapeutic and religious purposes. In this this short piece, five well-known attars are profiled. A varied repertoire of works by other prominent American composers will also be performed.

Internationally lauded for her dramatic, emotional and vibrant works, Judith Lang Zaimont has been described as "a serious artist, formidably endowed, and capable of a broad audience appeal" [FANFARE] and "a composer of the first rank- a mid-career master" [NEW MUSIC CONNOISSEUR]. Critics consistently praise her music, terming it "expressive and idiomatic" [CLAVIER], "colorful and commanding" [THE NEW RECORDS], and "exquisitely crafted, vividly characterized and wholly appealing" [NEW YORK TIMES].